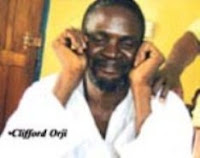 The story of Clifford Orji is a long one but let me try to summarize it.

Clifford Orji was arrested in February 1999 by the police under the bridge at Toyota Bus Stop,

along the Apapa-Oshodi Expressway in Lagos

after passers-by noticed his strange activities under the bridge.

Items found on him at the time of his arrest was a cheque for the sum of N88,000,

a cell phone, women underwear and fresh and roast human flesh and bones.


He had roasted one of his victims at the time and eaten part of her flesh.

but there was a theory back then that his madness was fake;

that ritualists put him under that bridge to act like he was mad,

find victims, kill them and sell their body parts to them.

Thus the cheque that was found on him. His arrest in 1999 was widely celebrated in the media.


Anyway, after 13 years in prison, Clifford Orji, who went completely mad in prison, has died.

He died on Friday August 17th in his sleep. He was 46 years old.