So if i read this piece very well, the black death that killed about 100,000,000 people was caused by superstition leading to the killing of cats which led to the infestation of rats, who carried fleas and infested humans because they were dirty, and finally they were no anti biotics to cure an infected person.

I love my cat that's all i will add. 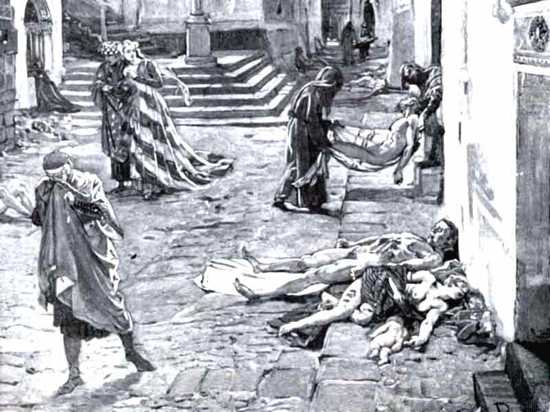 There is no one cause to blame for the Bubonic plague’s rise to power in 1346 or so, but Europe in general can be criticized strongly for its primitive belief in witches. Because “witches” were hunted down wholesale by reason of an insufferably pervasive fear of the Devil, domestic and feral cats were also killed by the hundreds of thousands, because they were thought to be witches’ “familiars,” that without one, a witch could not adequately cast spells.

So once witch-hunts showed up in full swing and cats started disappearing into the fires, the entire European world was ripe for an epidemic of rats. And the rats showed up in full swing in 1346 in the Crimea, via the Silk Road from China. There were no cats to check the rats stowing away onboard merchant ships, and these rats were infested with fleas. The fleas carried yersinia pests, better known as plague.
Today, this bacteria has been all but eradicated in most places around the world, because cleanliness is next to Godliness. A regular hot bath with soap will rid you of fleas, but such baths were not regular in the Middle Ages. Once bitten by an infected flea, curing yourself is really not difficult at all. Streptomycin prevents the bacteria from replicating, which gives the immune system enough time to tailor an antibody to kill it. Europe didn’t know about antibiotics, and had they, they might have had fair results by eating moldy bread.
Without treatment, plague is one of only three known diseases with a mortality rate of 100%. The other two are rabies encephalitis and HIV. Given the primitive medical knowledge of the Middle Ages, the world didn’t have a chance. Even the best physicians had no clue what to do to protect themselves, much less the populace.

Doctors entered homes only after donning full-body leather armor, helmets and masks shaped like hawk beaks, filled with aromatic herbs, due to the miasmatic theory of diseases. According to this theory, simply “stirring up the vapors” would cure the area of plague, while the doctor would remain safe breathing in his mask. The masks had red glass over the eyeholes, because even looking at an infected person was thought to cause infection.

Ringing bells was thought to stir up the vapors. Or the sick person could stand next to a latrine and inhale the stench. About the only method that actually worked to a small degree was smoking tobacco, because the smoke kept the fleas away. But the most infamous methods for curing the plague were based on the principle that God was very angry with the whole world.

The Flagellants began roaming the countryside by 1349, especially in Germany, and they beat themselves bloody with Roman-style flails, the same kind used to scourge Christ. The idea was that if they suffered enough, God would relent and the plague would stop. It didn’t work.

So, like clockwork, God’s wrath was blamed on the non-Christians throughout Europe, and that mostly meant Jews. In February of 1349, 2,000 Jews were hacked to pieces and burned at the stake in Strasbourg, on the French-German border. But the plague kept coming. It killed 40% of Egypt, 30% of the Middle East, about half of the 100,000 people in Paris. The worst hit area was Mediterranean Europe, including Italy, Spain, and southern France. There, about 75% to 80% died. The Pope, Clement VI, survived by surrounding his throne 24 hours a day with torches burning close to the floor. In the aftermath, his servants found scorched fleas “like pepper” just outside the ring of flame.

England suffered about 20% dead. The total average was about 25% of the whole world, as evidence indicates plague deaths in sub-Saharan Africa, India, and the Orient. As much as 66% of Europe and Asia succumbed. Approximately 100,000,000 people died in 4 years.
#historybit Dakky's bits Dakky's history bits.