Posted by dakkylove on December 07, 2016
This is the First Poem in a three Part series on a narrative that tries to capture the different emotions of people affected by the Oil and Gas Industry in Nigeria.

This particular poem seeks to capture the despair of the Niger Delta indigenes who feel disenfranchised and improperly compensated by the Oil Companies and the Government on activities on their Land. 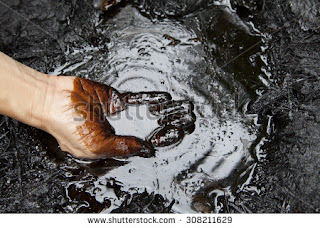 The earth rumbled beneath the weight of our hoes.
Unyielding, barren lands swallowing our seeds in whole.
The Chiefs perspired as the farmers came each day.
Complaints, frustration entangled in their tales of woe.
The Land was not yielding fruits, our Farmlands once green was blackened with dirt.
Our wives empty cooking pots lay bare on the kitchen floor,
Mocking us as we returned each day without food.
The hunger had become unbearable increasing the poor,
Dead fishes clung to the fishermen’s nets darkening the mood.
The gods must be angry, for they had cursed our lands with a dark oily substance in place of sustenance.
Polluting our rivers and forcing back our young men to wander on the roads.
Crippling our produce, the land spewing out hot liquid mimicking the anger of the gods.
We cried until the white man came.

Wheels of gigantic proportions rolled into our community,
Ferrying in machines so big we thought the earth had shifted.
Edifices the likes we had never seen before came forth from our land.
Like a river the force of civilization swept through our villages
Jumping over and cascading on islands claimed by the workers,
But we were patient, hopeful that the mighty cities constructed beyond our river points would be duplicated in our villages.
At last our weeping would end, the hunger would cease.
They promised us gold, who would have thought this cursed liquid would be our salvation.
We would have hospitals, schools and clean water they said,
Roads fit for the gods would be constructed by our sheds.
So we rejoiced, dancing till the night came and reversing our curses on the dark liquid.
For surely our tears had been wiped off, this gift camouflaged beneath our soil was our reward.
Or so we thought until the rains came……

Dark clouds heralded by loud thunder rumbled over our lands.
The insatiable greed of man’s quest for wealth revealed itself in an unending dark mist.
The promises of a better life were sandwiched between our leaders fight for riches and the white man’s thirst for Oil.
Like two large elephants they fought amongst themselves,
Scrambling over each other to claim our lands, when they were sated they turned to US.
Destroying anything that stood in their way of rummaging this Oil.
Fighting us daily to a standstill until exhausted we stood beneath the rain.
Still Hungry, Still Desolate, Still Poor, Still waiting for the unending promises we were told we would enjoy.
Our farmlands utterly destroyed, our waters polluted beyond compare.
Our leaders had abandoned us as they lobbied for bribes, we were totally forgotten.
Watching our children starve to death we cursed the day the black rains came.