Australian man has 2cm cockroach removed from his ear 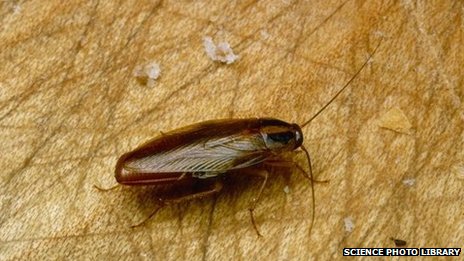 An Australian man has received medical treatment to remove a large cockroach that had burrowed into his ear.

Local media reported that the 2cm pest caused agonizing pain for Hendrik Helmer, and defied his efforts to suck it out with a vacuum cleaner.
It was finally killed by doctors at a hospital in the northern city of Darwin and removed using forceps.
"They said they had never pulled an insect this large out of someone's ear," he told ABC News.
Mr Helmer awoke on Wednesday morning to a sharp pain in his right ear.
At first he thought a poisonous spider had made its way into his ear canal.
When the pain intensified Mr Helmer tried to remove the unwelcome guest with a vacuum cleaner and by squirting water into his ear.

"Whatever was in my ear didn't like it at all," he said.
As the pain become more excruciating, his flatmate rushed him to hospital where a doctor tried putting oil down the ear canal.
But that only made the cockroach crawl in deeper, before it eventually began to die.
"Near the 10 minute mark... somewhere about there, he started to stop burrowing but he was still in the throes of death twitching," Mr Helmer said.
It was then that the doctor was able to put forceps into his ear and and pull out the cockroach.
"She [the doctor] said, 'You know how I said a little cockroach, that may have been an underestimate'," he said.

Mr Helmer told ABC he was not suffering any major discomfort and would not be taking any additional precautions before going to sleep.
But he said his friends were strongly advising him to go to bed with headphones on.
Dakky's picks Dakky's randombits