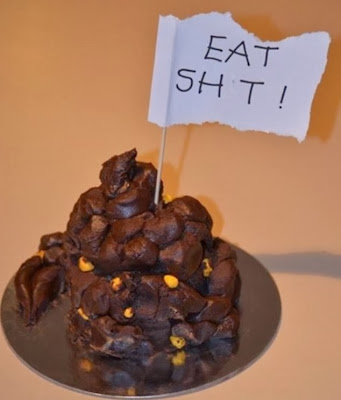 A bride-to be had an unexpected surprise at her engagement party when she opened up her cake to find she had been sent a dessert in the shape of faeces.
Micaela Harris, 24, of Invercargill, New Zealand ordered an extra cake for her engagement party, but after a disagreement between her sister and the cake maker, the result left a bad taste.

The baker, Emma McDonald, is said to have become annoyed at Harris’s sister for not specifying what type of cake she wanted, and sent her a pile of ‘chocolate poo’ with a flag stuck in it, telling the party guests to ‘eat shit"
Ms McDonald, who runs Oh Cakes, claims Ms Harris’s sister ‘got what she deserved’ for not specifying what she wanted other than ‘chocolate’.‘I have no regrets at all about what I did. I feel she got what she deserved,’
A family member said

"The cake was for an engagement party and this woman is not remorseful at all, which is disappointing,’It was wrapped up in a box, so it was done deliberately as a nasty surprise. It was a disgraceful thing to do"