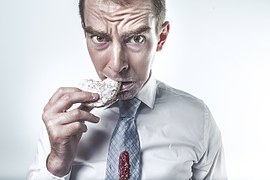 Have you ever noticed that dark souls love to cluster together, No I am really serious,“Misery loves company” is not just a philosophical quote thrown around with laxity just to have the last word in a conversation, it’s honestly a real thing.

Some time ago in a land where I refuse to mention its location for the sake of sanity, I walked into a conversation at the cafeteria, we had all just received our bonuses from work so I had a cute spring to my step and felt slightly better that I was operating on four hours of sleep instead of Eight .In my usual fashion, to celebrate I had ordered a healthy plate of sea food and was about to dive in when two men by my side suddenly started complaining.


They complained about the bonus, the job, their bosses, the hours, soon the lady behind me joined the fray and suddenly less than ten minutes into my lunch I found myself in the middle of a firestorm. Everybody had something to say, a conversation between two friends morphed into an unending litany of complaints. By the time lunch was done the contented feeling I had as I walked into the cafeteria had all but disappeared, now I had started feeling some kind of way about the job. It made for an extremely unproductive day, it took a stern discussion with a friend of mine who earned less than I did but worked more hours than did to get my priorities back in

Why feed the monster of discontentment? No situation is perfect, I have discovered sitting around to complain about your work environment does nothing but fan the embers of discontentment .this can actually spread like a virus affecting other employees and hampering productivity.
So what can we do to turn things around when this happens? I have a few suggestions.
In Conclusion we may feel some kind of way about our job but spending hours agonizing over your job is not productive. If you feel so strongly against it, you should properly just walk away, either that or get ready to get cardiac arrest…….

However whatever you do don’t feed the monster, nothing good can come out of a negative spaced work environment.