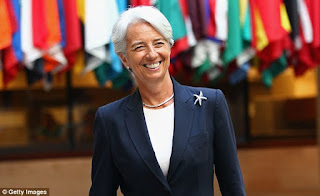 This article first appeared on the Atlantic, i thought it was an interesting read considering Nigeria's own Ngozi Okonjo Iweala is grouped along side these powerful women, standing strong, holding her own in th International Polity.

It’s been a tough week or two for the world’s women. First, no woman became UN secretary general. Then Donald Trump threatened to grab them by something that was heretofore unprintable. And now no women have won Nobel prizes. And yet there are women who have literally been running the world this whole time. The most prominent examples are marquee leaders like German Chancellor Angela Merkel and British Prime Minister Theresa May, but they’re far from alone. Here are five other women on top of the world.


5. Federica Mogherini. The EU foreign-policy chief is a tough position. National leaders like Angela Merkel will always hold more sway in European politics. Nonetheless, Mogherini took over in 2014 at a time when external issues loom large for Europe: She was in the room for the Iran negotiations and has been out front on the refugee crisis. As Brexit negotiations sap the attention of EU politicians, her competence in handling external issues will matter even more. Another point in her favor: She managed to annoy far-right euroskeptics by showing emotion in public after the Brussels bombings. More of that, please.


4. Ngozi Okonjo-Iweala. Nigeria’s two-time former finance minister is on something of a career break, having left office last year when a new president took over. But downtime is relative. Okonjo-Iweala is currently chairing GAVI, an international nonprofit that supports vaccines and immunizations. As finance minister, she led a massive debt write-off for Nigeria and generally worked to temper the country’s corrupt image. A runner-up for the top position at the World Bank, she likely won’t stay on “break” for long.

3. Fatou Bensouda. The International Criminal Court is arguably less than the sum of its parts. The idea behind it is important enough that that France can threaten to involve the court in the war in Syria. But in practice it is a deeply limited institution: The court can only operate in areas like Syria if the Security Council agrees, and its resources are scarce. In that environment, leadership matters greatly. Bensouda is only the second chief prosecutor in the court’s history. She has pushed forward its investigations despite intense political pushback, especially in Africa, where leaders have begun to flaunt the court’s mandate in its pursuit of leaders like Sudan’s Omar al-Bashir. Without leaders like Bensouda, France wouldn’t even have a cynical card to play.
2. Elvira Nabiullina. If all you knew about Russia was based on reports of Vladimir Putin’s aggressive adventurism, you might assume his government was packed with incompetent kleptocrats. They are there, to be sure, but at least one Russian agency is a model of professionalism: the Central Bank of Russia. It has earned that reputation largely through the work of Nabiullina, its governor. Russia’s economy is in long-term trouble, but Nabiullina has staved off crisis by aggressively pursuing an independent, technocratically sound monetary policy. Given that Putin tends to lash out in a crisis, we’ll put this in the win column for world peace.

1. Christine Lagarde. Start with a baseline of competent, effective management—not a given for the International Monetary Fund, considering how its previous managing director left office. Add to that the successful badgering of the U.S. Congress to accede to reforms that in some ways dilute American power by giving more authority to the developing world. Throw in a vigorous effort to keep growing China within the tent by including its currency in the official IMF reserve basket. Those would be sufficient achievements for most leaders, but Lagarde has gone further, using her bully pulpit to call attention to the refugee crisis, an area arguably outside her institution’s core competency. And despite the dangers of alienating a possible U.S. president, even Lagarde couldn’t avoid being drawn into the Trump controversy last week, calling for women everywhere to have their “dignity respected.” Doesn’t seem like too much to ask.