The Queen and The Lycan PROLOGUE 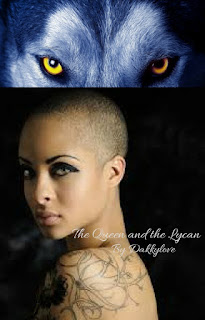 Guys like i said i am writing my first mythical tale , werewolf and all, if you are on wattpad follow dakkylove, you will updates on the story as soon as its written.

Chapter 1 is available , i will be sharing it here as well but days after being published ion wattpad.

Read the Prologue below.

David sat leaning on the bench in the busy park in Andida ,the busy capital of the Matigwe, hot sweat dripped from his body staining his loose T Shirt , mists of sweat blurred his sunglasses , he had been warned  of the harshness of the African sun but he had no idea it was this brutal, he adjusted his dark glasses back on his nose after wiping the sweat from his glasses, he  tried to pretend he was listening to his companion sitting by his side rambling on about diamond mines, As he flapped a butterfly which had perched on the side of his bench he suddenly felt overpowered by his senses.

He felt her before he saw her, his wolf rumbled suddenly awakened by a smell that seeped into its very essence, his eyes scanned the environment desperate to locate the source of his discomfort , he let out a sudden breath when he sighted her, Long beautiful legs slid out of a dark tinted SUV, his eyes hungrily traced the length of those legs as the owner stepped out unto the pavement, the atmosphere suddenly became tense, it was as if the whole world stopped and his heart was the only active organ in his system.

A tall dark chocolate colored Amazon stood at the far end of the street surrounded by men who appeared to be body guards, her dark skin glistened under the afternoon sun , her scent leaving him breathless, slender yet curvy was the adjective that came to mind as he looked her body over like a thirsty deer in need of water, her bald head stood out like a challenge announcing its presence to the surrounding humans as if to say this one had no need for hair to stamp her beauty, he watched transfixed as she swayed her hips and headed for a building, all the hairs in his body stood on guard, unconsciously he stepped forward like a drugged maniac being pulled by an invisible chord, his wolf stretched out as sharp claws struggling to be released from his tight fist dug deep into his skin. Without warning she stopped and turned around, her gaze scanning the environment perfunctorily until eyes behind dark glasses met his.
Time stood still for a moment, they were locked in a gaze that ignited fire storms from 300 meters away, A tall elderly man looked at both of them in amusement and tapped her breaking the gaze, suddenly his wolf whined as if something precious had been taken from him, she was gone. He suddenly realized what had brought him here, a million miles away from home. he was here for HER.
Here is the Link to Chapter 1 on wattpad.